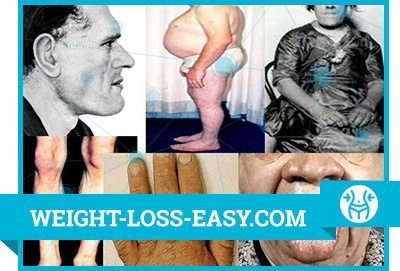 Acromegaly is a severe, chronic neuroendocrine disease resulting from the overproduction of growth hormone by the pituitary adenoma (somatotropinoma).

The prevalence of acromegaly is about 40-60 cases per million population, the incidence of new cases is 3-4 per million people per year. It occurs with the same frequency in men and women, usually at the age of 40-60 years.

In acromegaly, pituitary adenomas secreting growth hormone are detected in 99% of cases. Immunohistochemically, in addition to pure somatotropic adenomas (about 45%), mixed prolactosomatropins (about 30%) are isolated. The remaining 25% of adenomas, in addition, produce other adenohypophysial hormones: TSH, a-subunit, LH, FSH.

By their origin, somatotropinomas are monoclonal tumors that develop as a result of somatic mutation of somatotrophs. In 40% somatotropin, a mutation of the Gsp protein can be detected, which provides for the dimerization of the a and ß subunits of G proteins. Somatotropinoma can be an integral part of the 1st type multiple endocrine neoplasia syndrome (MEN-1).

In adults, since after ossification of the epiphyseal cartilages, further growth is impossible, acromegaly develops (from akros – extreme, megas – large). With this pathology, accelerated growth of the body is also noted, but not in length, but in width due to soft tissues, which is manifested by disproportionate periosteal growth of the bones of the skeleton, an increase in the mass of internal organs and a characteristic metabolic disorder.

Changes in the organs of acromegaly are reduced to their true hypertrophy and hyperplasia, which is associated with the predominant growth of mesenchymal tissues. The parenchyma and stroma of all internal organs grows: lungs, heart, liver, pancreas, intestine, spleen. With the progression of the disease in connection with the proliferation of connective tissue in all organs, sclerotic changes occur, accompanied by the progressive development of their failure. In parallel, there is an increase in the risk of benign and malignant neoplasms in all tissues and organs, including endocrine ones.

Acromegaly, as a rule, is characterized by a gradual onset with a slow increase in symptoms and a change in appearance. Acromegaly is diagnosed on average about 7 years after the actual onset of the disease. The main symptoms are:

Severe articular cartilage hypertrophy causes arthralgia. An increase in the number and increase in the functional activity of the sweat glands leads to significant sweating (on examination, sweat streams can sometimes be seen flowing down the patient’s body). Activation and hypertrophy of the sebaceous glands, thickening of the skin lead to its characteristic appearance (dense, thickened, with deep folds, more pronounced on the scalp).

The goal of the treatment of acromegaly is the elimination of autonomous hyperproduction of growth hormone, normalization of the level of IGF-1 in the blood and the absence of an increase in plasma level of growth hormone in the glucose tolerance test (75 g glucose) above 1 ng / ml. These criteria correspond to the remission of the disease.

Mortality with acromegaly is 2-4 times higher than among the population. In general, primarily due to cardiovascular diseases. With the normalization of the level of IGF-1 and the elimination of hypersecretion of GH, mortality is reduced to the average.