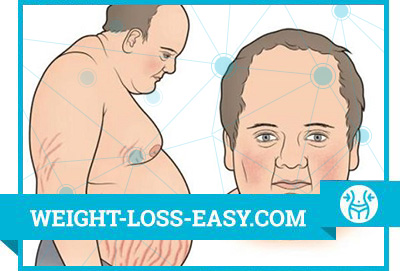 Itsenko-Cushing’s disease is a disease in which an excess amount of adrenocorticotropic hormone (ACTH) is produced in the pituitary gland that regulates the adrenal gland. With an excess of ACTH, the adrenal glands increase in size and intensively produce their hormones – corticosteroids, which leads to the disease.

The symptoms of this disease were described at different times by two scientists – the American neurosurgeon Harvey Cushing and the Odessa neuropathologist Nikolai Itsenko.

An American specialist associated the disease with a pituitary tumor, a Soviet scientist suggested that the cause of the disease lies in changes in the hypothalamus – the part of the brain responsible for the interaction of the nervous and endocrine systems. Today, scientists came to the conclusion that Itsenko-Cushing’s disease occurs as a result of malfunctions in the hypothalamic-pituitary system – both researchers were right.

Itsenko-Cushing’s disease, or otherwise hypercorticism, is a severe neuroendocrine disease that occurs in case of dysregulation of the hypothalamic-pituitary-adrenal system, when an excess of adrenal hormones – corticosteroids is formed.

A cascade of hormonal changes in the body is launched.

It all starts with the fact that mysterious nerve impulses enter the hypothalamus, which cause its cells to produce too many substances that activate the release of adrenocorticotropic hormone in the pituitary gland.

In response to such powerful stimulation, the pituitary gland releases a huge amount of this adrenocorticotropic hormone (ACTH) into the bloodstream. It, in turn, affects the adrenal glands: it makes them in excess to produce their hormones – corticosteroids. This is where complete chaos begins, because corticosteroids affect all metabolic processes.

As a rule, in Itsenko-Cushing’s disease, the pituitary gland is enlarged (a tumor, or pituitary adenoma). As the disease progresses, the adrenal glands increase as well.

Diagnosis of the disease, as a rule, is not very difficult, because of paramount importance are the data of a physical examination of the patient. More than 90% of patients have obesity of one degree or another, with particular attention to the distribution of fat – dysplastic (by Cushingoid type): on the abdomen, chest, neck, face (the moon-shaped face is purple-red in color, sometimes with a cyanotic hue – the so-called matronism) and the back (the so-called “climacteric hump”). From other forms of obesity, Itsenko-Cushing’s syndrome is distinguished by a thinned, almost transparent skin on the back of the hand.

Muscle atrophy – a decrease in muscle mass, accompanied by a decrease in muscle tone and muscle strength, especially the gluteal and femoral (“sloped buttocks”) – a typical sign of Itsenko-Cushing’s syndrome. Atrophy of the muscles of the anterior abdominal wall (“frog stomach”) is also observed, and over time hernial protrusions appear along the white line of the abdomen.

The patient’s skin becomes thinner, has a “marbled” appearance with a clear vascular pattern, is prone to dryness, is interspersed with areas of regional sweating, and peels off.

Very often stretch marks appear on the skin – stretch bands of a crimson or purple color. Basically, striae are located on the skin of the abdomen, the inner and outer surfaces of the thighs, mammary glands, shoulders, and can be from a few centimeters to several millimeters. The skin is full of various rashes such as acne, manifested as a result of inflammation of the sebaceous glands, numerous subcutaneous microbleeding, vascular “stars”.

In some cases, with Cushing’s disease and ectopic ACTH syndrome, hyperpigmentation can be observed – an uneven distribution of pigment, manifested in the form of darker and brighter spots that differ from the main skin color. The disease associated with damage (thinning) of bone tissue leading to fractures and bone deformities – osteoporosis – is one of the most serious complications accompanying Itsenko-Cushing’s syndrome. As a rule, osteoporosis develops in the vast majority of patients. Fractures and deformities of the bones, accompanied by strong painful sensations, eventually lead to scoliosis and kyphoscoliosis.

There are several reasons that can cause cardiomyopathy, the main ones are the catabolic effects of steroids on the myocardium – the heart muscle, electrolyte shifts and arterial hypertension. Manifestations of cardiomyopathy are heart rhythm disturbances and heart failure. The latter in most cases can lead to death of the patient.

The nervous system may experience strain, is characterized by unstable work: the patient’s condition can vary from lethargy and depression to euphoria and steroid psychoses. Often patients do not make any complaints about their condition, while it can be life threatening.

In a small part of patients – 10-20% – steroid diabetes mellitus can occur. The disease can occur under the influence of various factors unrelated to damage to the pancreas, characterized by prolonged maintenance of a normal concentration of insulin in the blood. The course of such diabetes is rather mild, it is well compensated against the background of individual diet therapy and the appointment of sugar-lowering drugs.

Excess production of the adrenal androgens leads to the development of hirsutism – excessive male hair growth in women. In the vast majority of cases, menstrual irregularities occur, amenorrhea occurs – a woman has no menstruation for 6 months or more.

As screening tests are shown:

The development and implementation of new diagnostic methods, as well as new methods for visualizing the pituitary gland and adrenal glands (ultrasound, computed tomography, magnetic resonance imaging), allows us to establish the exact location of the tumor, its size, relationships with surrounding tissues, the direction of growth and choose the optimal treatment method in each case. Therapy for Itsenko-Cushing’s disease is recommended to be carried out in a specialized endocrinological hospital.

Today, selective transsphenoid adenomectomy remains the most optimal treatment for Itsenko-Cushing’s disease. An indication for neurosurgical surgery is a clearly localized pituitary adenoma (according to computed or magnetic resonance imaging). Contraindication is an extremely severe form of Itsenko-Cushing’s disease or the presence of severe somatic diseases in a patient. With a clearly localized pituitary tumor, regardless of its size, a transsphenoid adenomectomy gives positive results in most patients, does not require prolonged replacement therapy, and provides a relatively quick restoration of the hypothalamic-pituitary relationship. After an adenomectomy, remission of the disease occurs in 70-80% of cases, relapse may occur in 12-20%.

In the absence of data confirming the presence of pituitary adenoma, it is considered advisable to carry out proton therapy on the pituitary gland, which is often combined with unilateral adrenalectomy.

Drug therapy for Itsenko-Cushing’s disease consists in the use of drugs that suppress the secretion of ACTH (the central action is dopaminergic substances, antiserotonin GABAergic drugs) and steroid hormone biosynthesis blockers in the adrenal glands. The latter are divided into agents that block the biosynthesis of corticosteroids and cause the destruction of cortical cells (derivatives of ortho-para-diphenyldichloroethane) and which block only the synthesis of steroid hormones (derivatives of aminoglutethimide).

It should be noted that steroidogenesis inhibitors are prescribed immediately after confirming the diagnosis of Itsenko-Cushing’s disease (both before surgery, and after proton therapy or surgery).

Against the background of the treatment of the underlying disease, symptomatic therapy is mandatory:

A bilateral adrenalectomy (which has been used less frequently in recent years, but the absolute indication for its implementation is the severe course of the disease and the inability to compensate for the condition with other available methods) leads to the patient having chronic adrenal insufficiency, which requires lifelong replacement therapy with gluco- and mineralocorticoids. Patients need dynamic monitoring by an endocrinologist, they are advised to avoid heavy physical exertion, work on the night shift.

Bilateral adrenalectomy can be complicated (in 10-50%) by Nelson’s syndrome – a combination of primary chronic adrenal insufficiency (after surgical treatment or prolonged use of chloditan) with progressive pituitary corticotropinoma. Nelson’s syndrome is characterized by all signs of primary hypocorticism against a background of high levels of ACTH secretion. Magnetic resonance imaging confirms the presence of a rapidly growing pituitary macroadenoma. The methods of choice are transsphenoid adenomectomy or proton therapy to the pituitary gland. For substitution treatment, it is advisable to prescribe dexamethasone in low doses (0.125-0.25 mg) in combination with prednisone or cortisone. In all cases, it is necessary to use the powerful mineralocorticoid preparation 9-alpha-fluorocortisole. It should be noted that in clinical practice there are cases of individual patient susceptibility to a particular drug used for replacement therapy. Unfortunately, in the pharmacy network it is not always possible to find a drug that is suitable for a particular patient and with the use of which the best clinical and metabolic compensation of adrenal insufficiency is achieved, since not all drugs of this group are registered in Ukraine.

In the presence of a tumor of the adrenal gland, surgical removal of the affected gland is performed, followed by temporary replacement therapy. In case of a malignant tumor, if no metastases are detected or single metastases are detected, the adrenal gland is removed, followed by the appointment of chloditan for a long time (if necessary, in combination with glucocorticoids). After surgery, all patients need long-term follow-up by an endocrinologist, cardiologist, neurologist, gynecologist.

For prophylaxis, irrespective of the pre-exposure of the pituitary gland in Itsenko-Cushing’s disease, after bilateral total adrenalectomy, it is necessary to conduct an X-ray examination of the Turkish saddle, visual fields and the content of adrenocorticotropic hormone in the blood plasma annually.