Index of body weight or commonly referred to as body mass index abbreviated as BMI is a quantitative measurement which is derived from the height and the mass (weight) of an individual. Mathematically, BMI is calculated through two very simple steps. First, divide the mass of the individual with their height. After that, divide the quotient with the height again. The final result is the BMI of the individual. Since the units involved in the calculations do not cancel out, the BMI has got units. The SI unit for mass is kilogram (kg) and the height which can be taken to be length is measured in metres (m). Hence the resultant unit for BMI is kg/m2. The kg/m2 is the universally accepted unit of expressing the BMI of an individual throughout the world.

Consider a case where we have an individual with a body mass of 54kg and with a height of 1.5 metres. To determine the body mass index, proceed as follows:

In the earlier schools of thoughts, the BMI number was known to be a quantifier of the fat an individual has in his/her body. As a result, it was believed that the larger the value of the BMI, the more fat an individual has. The reverse was also true, the lesser the value of BMI the lesser the fat in the body. Even today, the BMI is still is used as a tool for screening, in which case the number helps to determine whether the weight of an individual is putting him/her at risk of health problems more so diabetes, hypertension and cancer.

The BMI of an individual is not always calculated in the universal or standard units i.e kg/m2. There exists some cases where the derivatives of both mass and height are used in calculations. One such common derivative of mass which is used is the pound, and is used hand in hand with the inch which is a derived unit of length (height). When calculated in pounds per square inches, the formula for calculating body mass index slightly changes. First, the weight in pounds is multiplied by a constant: 703 before it is divided by the square of the height in inches.

If an individual weighs 120 pounds and he/she is 63 inches tall, then his or her body mass index is calculated as follows:

Body mass index= (weight in pounds multiply by 703) divided by (square of height in inches). Hence;

It was necessary to have a common point of reference for interpretation of BMI values. As a result, many nations and scholars after conducting several significant studies proposed some BMI range of values which could imply different meanings. It is however worth to not that reference was made mostly to obesity when this values were being proposed. These are the by then range of values of body mass index and their corresponding implications.

Due to differences in climatic conditions among other differences, some countries adopted their own body mass indices which are different from the universal BMI. Some of the countries are Hong Kong, Japan

Studies that were conducted amongst Asian populations proved that majority of the Asian populations, including Singaporeans, generally have higher proportion of body fat and have increased risk for heart diseases and diabetes mellitus, as compared with their Caucasian counterparts at the same BMI. The BMI cut-offs, for this reason, are presented with an emphasis on health risk instead of weight. The following guidelines are thus being used in Singapore:

In USA, the BMI is thought to be gender based and varies with age. Below is a table that has the body mass index values for USA citizens with respect to gender and age range.

Body Mass Index values for males and females aged 20 and over, and selected percentiles by age: United States 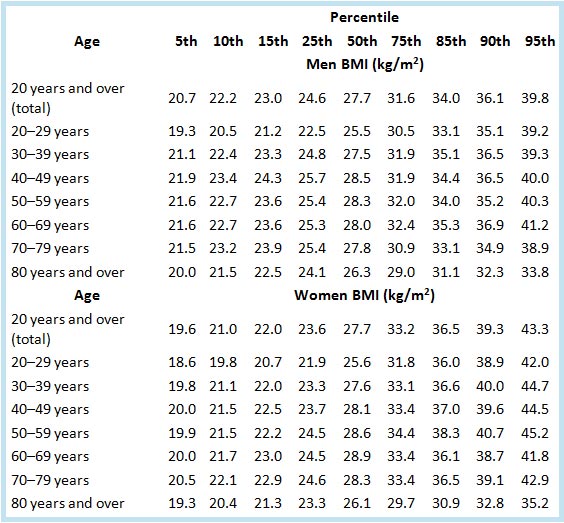 Following the values displayed in the table above, quite a large population of US citizens have been diagnosed as overweight consequently leading to a tremendous increase in the sales of products that assist in weight loss. Also, there is a debate on the definition of an underweight woman. On their part, doctors argue that any BMI number between below 18.5 and not exceeding 20 is underweight. In fact, the most commonly value stated is 19. Starvation is usually defined by a body mass index of 15 and below. An informal criteria is used for the diagnosis of anorexia nervosa using body mass index when the body mass index is below 17.5.

The Body mass Index for Children and Teens

Calculations for body mass index of children and teens age 2-20 years are similar to those of adults. However, after obtaining the BMI value, the value is compared against an established graph which contains different curves representing different body mass indices. The curves on the graph could have different colors and well defined ranges for underweight, normal weight, overweight and obese. This is set in percentiles. A sample of such a graph is shown below. 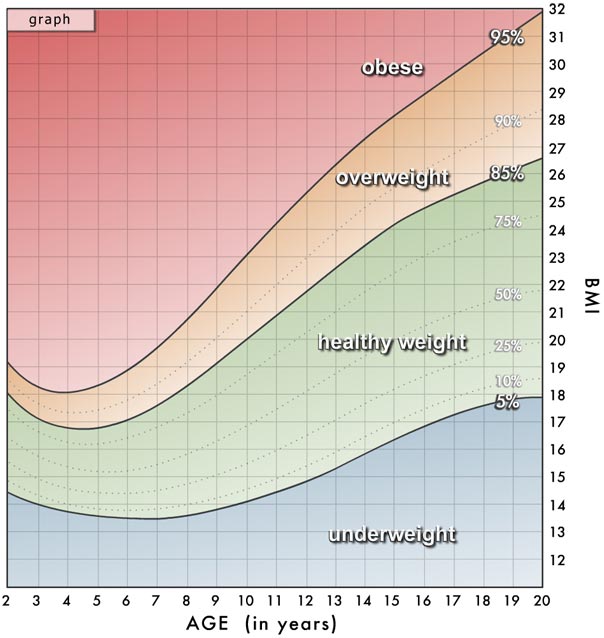 The BMI values have been put into a variety of uses. Some of these uses are still applicable while others have been faded out by improvements.

Mathematicians argue that the error involved in the calculation of body mass index is significant and that there is need for a revision on the same since it makes the whole thing less useful for health evaluation.

Does not put into account the variations in shape of individuals. Two persons can have the same height and the same weight. However, their complexions may be significantly different. For instance, one can be tall and with a wide frame. Another one may be tall, probably with the same height as the first one, but with a small frame. Generally, a person with a small frame is most likely having more fat than optimal although their body mass index values may indicate that they are normal. In the same way, tall or people with large frames may be classified to be overweight while even though they may be having a low body fat.

BMI does not put into account the differences between muscle mass and fat mass. People who are very fit or athletic, have a high muscle mass and their BMI can classify them as overweight yet their body fat could be as low as 10%.